Sun ILOMs are unusable in modern Firefox browsers. iframes with buttons and drop-down menus are not visible possibly because of some JavaScript bug. As a workaround, you can install Stylish extension and create new style using the code below:

You can also use @-moz-document rule to specify which pages the style is going to be used on. More info here.

According to this post build 130 is going to be the final build of Solaris Express: Community Edition. Get it while you can as the downloads will be removed after two weeks (including previous builds).

People who don't want to wait for Solaris Express Community Edition b129 or OpenSolaris dev repository to be updated to b129 (b128 is not going to be released) can easily try ZFS deduplication now.
Blindingly Fast Upgrade (BFU) archives for build 128 are available here now. These archives are used mainly by the developers but we can use them easily for testing as well. Please note that your OpenSolaris installation is not going to be consistent after BFU'ing from the pkg(1)'s point of view. It is likely that pkg image-update will not be able to upgrade such system in the future. Be prepared to re-install your system. I usually try new archives in unimportant VirtualBox/VMware VMs. Here are the commands I have used to upgrade my test VM running OpenSolaris b127 to b128 (as root):
wget http://dlc.sun.com/osol/on/downloads/b128/SUNWonbld.i386.tar.bz2
wget http://dlc.sun.com/osol/on/downloads/b128/on-bfu-nightly-osol-nd.i386.tar.bz2

Reboot the machine. Newly booted system will have deduplication support. To try ZFS deduplication you can either create new pool (that's what I did) or upgrade 'rpool' zpool's format:
zpool upgrade rpool

And run some tests:

239MB allocated. Excellent!
Posted by aszeszo at 01:34 No comments:

Some BIOSes are able to load pxegrub but then report 'No Ethernet Card Found' error. I was getting this error on my test machine (ASUS M3N78-VM motherboard with AMIBIOS). I have found a great explanation and solution here:

You can find pxegrub I have compiled from OpenSolaris sources some time ago here. I have commented out gateA20_set() call in netboot/undi.c file before compiling.
Posted by aszeszo at 12:50 No comments:

My take on Google server tray

For some time I wanted to have a dedicated test machine at home. I had only few requirements - I wanted a 64-bit CPU, 8GB RAM and network adapter that is using drivers that are present in OpenSolaris and VMware ESXi.

After looking at various dmesg outputs online I have selected ASUS M3N78-VM motherboard. The motherboard is using forcedeth driver on Linux for the network adapter. I knew that OpenSolaris had nge driver and VMware ESXi 3.5 had forcedeth driver for nForce Ethernet adapters so I thought that it was a safe choice. If not supported out of the box the drivers would require very little modification to get them working. The motherboard has an integrated video adapter which is a bonus.

For the CPU I have selected AMD Athlon X2 7850 Black Edition processor. It is obviously a 64-bit CPU and has virtualization extensions. It also comes with a heatsink in
the retail box.

I used Crucial to get 8GB of RAM and Amazon to get a power supply.

I really liked Google's approach to their servers and thought that I could do something similar. I went to a local Ryman stationery store and purchased two transparent document trays. Motherboard fits nicely into one of them. I am using the second one for the HDDs.

Here is the final result: 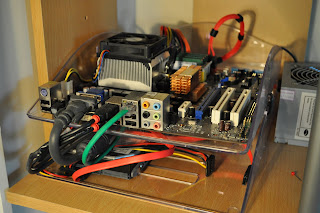 I had an old drive I was going to use with this machine and I was looking to use PXE boot/USB sticks for OS installations so optical drive was not required. All the parts came down to roughly to £230 with shipping:

ips-mirror.py is a succesor to my IPS repository mirror script I have put together last year (indiana-discuss thread). I wrote the script in Python this time. It can mirror whole repositories or just parts of them now. It is possible to limit the architecture of the mirrored files now as well. Few interesting use cases:

You can mirror the whole OpenSolaris dev repository if you like. I don't recommend it as there are over 30GB of files to download :). It is doable though:

After the script has done its job, which can take few days in this case, you want to run pkg.depotd with the --rebuild parameter.

pkg.depotd will generate a catalog from the manifests in the pkg directory and start serving the packages. It will also generate search indexes which can take a while.

Mirroring the OpenSolaris 2009.06 release packages for i386:

Mirroring the latest OpenSolaris packages for i386 from the dev repository:

It is also possible to mirror repositories over https with connection specific certificate and the key: